Books belong together. Whether they topically complement each other, creating a well-rounded reader, or they create a variety filled reading list that excites and challenges, you’re made up of more than just one title.

Here’s another recommendation for #BundleWeek , coming at you from the Marketing Department:

END_OF_DOCUMENT_TOKEN_TO_BE_REPLACED

Can the efforts of local environmental stewards impact resource management, environmental governance, and even social movements? What are the impacts of citizen science? How do we build resilient communities? This bundle includes resources for a broad transdisciplinary audience of researchers, educators, and practitioners who are interested in improving existing programs or developing new ones.

END_OF_DOCUMENT_TOKEN_TO_BE_REPLACED

One of my former Baja students wrote, just last week, with two exciting bits of news. First, now that she finally has a real job, she is buying a house in Billings, Montana.  Second, she is pursuing certification as a master naturalist. I wrote her back immediately.

Although it’s always exciting to learn that former students are acquiring mortgages and the other accoutrements of adulthood, I was intrigued by the news that she planned to become a master naturalist.

I must confess that, despite having taught natural history courses at the university level for a dozen years, I had no idea what qualifies one as a master naturalist. I got on the internet and searched for master naturalist programs, pleased to discover not only that such things exist, but that there is a fledgling organization, the  Alliance of Natural Resource Outreach and Service Programs, ANROSP, that networks naturalist and/or master naturalist training programs in 29 states.

In the days of yore my mother earned a bachelor’s degree in interpreting natural history at the University of Colorado. Does that sound a bit old school? These days, one interested in such things might pursue a course of studies in environmental education, and I know of at least one master’s program in that subject offered by Western Washington University. But even there, the question might be asked what qualifies one as a master naturalist.

In my recent book, Coves of Departure: Field Notes from the Sea of Cortez, I mention that Harvard’s E. O. Wilson, one of the foremost naturalists at work today, writes of having once been instructed that he couldn’t call himself a naturalist until he had identified ten thousand species. Yikes. But even if Wilson’s counsel had been offered tongue-in-cheek, it dabbles with a real question of whether one can actually master natural history.

Experts could argue that the master would need such breadth of knowledge that it would take a lifetime to achieve sufficient depth to achieve mastery.

In my next book, Nature Beyond Solitude: Notes from the Field, I make the case that we are just now entering into the golden age of natural history. Many will argue otherwise, however, because less and less natural history is being taught at the university level. This is especially true in biology departments, where expertise in organismal biology is being replaced by interests in molecular & cellular biology. At the same time, citizen science is producing a wealth of data related to natural history that could never have been collected, let alone processed, as recently as when I earned my bachelor’s degree. And now we have programs like the Montana Master Naturalist Program!

Even if I’m wrong about a forthcoming golden age of natural history—you’ll have to read the book to decide on that—it must be stipulated that natural history is occupying vibrant new niches everywhere one looks.

Here in Seattle, just a few days ago, more than 5,000 Amazon employees signed off on an open letter to the company’s board of directors that identified climate change as an existential threat. I doubt that many of the signatories of this letter would identify themselves as naturalists, let alone master naturalists, and yet the letter itself, which can be read HERE, is informed by a sophisticated understanding of ecology and natural history. I am encouraged by the shared belief, articulated in this letter, that “climate impact must be a top consideration in everything we do.”

Natural history relates directly and unambiguously to climate change. Indeed, the American Museum of Natural History recently opened a permanent display on climate change. The exhibit covers everything from corals to glaciers, forests to polar ice caps, and that’s a lot of natural history. And now what we need are a few more master naturalists to help us understand where we’re going with nature.

John Seibert Farnsworth, who recently moved to the Pacific Northwest, is fast becoming a serial author with Comstock Publishing Associates. His first book, Coves of Departure: Field Notes from the Sea of Cortez, was released this past November. His second, Nature Beyond Solitude: Notes from the Field, will be published on March 15.

A recent report by the United Nations’ Intergovernmental Panel on Climate Change (IPCC) found that we are headed for a global warming crisis much sooner than previously predicted. Prior to this new report, environmental scientists considered the threshold for code-red climate change to be a temperature increase of 3.6 degrees Fahrenheit. Now, the IPCC has found that the threshold is more accurately 2.7 degrees Fahrenheit. If we carry on as we are without rapid and large-scale changes to protect the environment, scientists give the year 2040 as the benchmark for a global warming crisis. This would mean a widespread death of most coral reefs, more frequent wildfires, worsening food shortages, rising sea levels threatening coastal cities, increased rates of poverty and decreased access to natural resources.

During times like these, we can feel powerless in making a difference regarding these issues that seem so much larger than what’s in our control. The first step, and one we can all take, is getting educated on this pressing matter. Cornell University Press’ motto is, “Changing the World One Book at a Time.” In applying this attitude to the growing climate change problem, we’ve compiled this list of environmentally conscious must-reads.

It is not a question of whether the planet is sustainable; the challenge facing life on Earth—and the life of the Earth—is whether an expanding and high-consumption species like ours is sustainable. Only new resources, new priorities, new policies and, most of all, new knowledge, can reverse the damage that humanity is doing to our home—and ourselves. A sustainable human future, Rhodes concludes in this eloquent, sobering, but ultimately optimistic book, will require a sense of responsible stewardship, for we are not owners of this planet; we are tenants.

“It’s impossible to grasp the whole planet or integrate all the descriptions of it. But because we live here, we have to try. This is not just an artistic compulsion or an existential yearning, still less an academic exercise. It’s a survival issue. This is the only planet we have. We’re stuck here, and we don’t own the place—it would be the height of arrogance to assume that we do. We’re tenants here, not owners, but we’re tenants with hope for a long-term tenancy. We want to extend our lease just as far as we can.”—from Earth 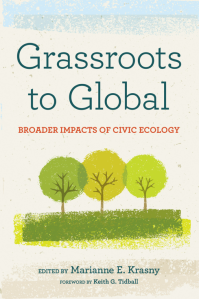 Addressing participatory, transdisciplinary approaches to local stewardship of the environment, Grassroots to Global features scholars and stewards exploring the broad impacts of civic engagement with the environment. Chapters focus on questions that include: How might faith-based institutions in Chicago expand the work of church-community gardens? How do volunteer “nature cleaners” in Tehran attempt to change Iranian social norms? How does an international community in Baltimore engage local people in nature restoration while fostering social equity? How does a child in an impoverished coal mining region become a local and national leader in abandoned mine restoration? And can a loose coalition that transforms blighted areas in Indian cities into pocket parks become a social movement? From the findings of the authors’ diverse case studies, editor Marianne Krasny provides a way to help readers understand the greater implications of civic ecology practices through the lens of multiple disciplines.

In Citizen Science, experts from a variety of disciplines—including scientists and education specialists working at the Cornell Lab of Ornithology, where many large citizen science programs use birds as proxies for biodiversity—share their experiences of creating and implementing successful citizen science projects, primarily those that use massive data sets gathered by citizen scientists to better understand the impact of environmental change.

In a speech delivered in Japanese at Cornell University, Naoto Kan describes the harrowing days after a cataclysmic earthquake and tsunami led to the meltdown of three reactors at the Fukushima Daiichi Nuclear Power Plant. In vivid language, he tells how he struggled with the possibility that tens of millions of people would need to be evacuated. Cornell Global Perspectives is an imprint of Cornell University’s Mario Einaudi Center for International Studies. The works examine critical global challenges, often from an interdisciplinary perspective, and are intended for a non-specialist audience. The Distinguished Speaker series presents edited transcripts of talks delivered at Cornell, both in the original language and in translation.

Throughout the twentieth century, despite compelling evidence that some pesticides posed a threat to human and environmental health, growers and the USDA continued to favor agricultural chemicals over cultural and biological forms of pest control. In Ghostworkers and Greens, Adam Tompkins reveals a history of unexpected cooperation between farmworker groups and environmental organizations. Environmental organizations and farmworker groups also acted as watchdogs, monitoring the activity of regulatory agencies and bringing suit when necessary to ensure that they fulfilled their responsibilities to the public. These groups served as not only lobbyists but also essential components of successful democratic governance, ensuring public participation and more effective policy implementation. 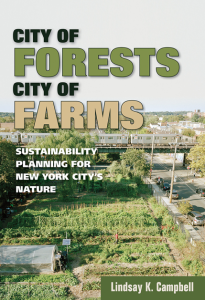 City of Forests, City of Farms is a history of recent urban forestry and agriculture policy and programs in New York City. Centered on the 2007 initiative PlaNYC, this account tracks the development of policies that increased sustainability efforts in the city and dedicated more than $400 million dollars to trees via the MillionTreesNYC campaign. Lindsay K. Campbell uses PlaNYC to consider how and why nature is constructed in New York City. Campbell regards sustainability planning as a process that unfolds through the strategic interplay of actors, the deployment of different narrative frames, and the mobilizing and manipulation of the physical environment, which affects nonhuman animals and plants as well as the city’s residents.

Brenna O’Donnell is a publicity intern in the marketing department of Cornell University Press and strong advocate for environmental policy reform.