Last May, my parents and I visited the Catacombs of Paris, one of the most famous ossuaries of France. For two hours we traveled underground through long, damp hallways full of the bones of more than six million Parisians. Many of the younger tourists took selfies next to bones arranged in sculptures or historical plaques. When I took my phone out to take pictures, my father warned me not to. “It’s bad ju-ju to take pictures of the dead,” he told me. “You need to show respect.”

It’s been a year now since my visit. Soon it will be Memorial Day, the day in the US where we remember and respect those who have died in military service. France has a similar day in November known as Remembrance Day, celebrated on the 11th. The rest of Europe also celebrates this day as Victory Day, when the First World War ended.

Two hundred years before the First World War, Parisians’ treatment of their dead underwent a huge transformation after the Reign of Terror. Before the Terror, Paris’ burial sites were mass graves and small, overcrowded churchyard cemeteries. Afterwards, they became individual graves, ossuaries, and attractive graveyards with trees and flowers. The citizens’ dead became an anchor to their country instead of a reason to flee. 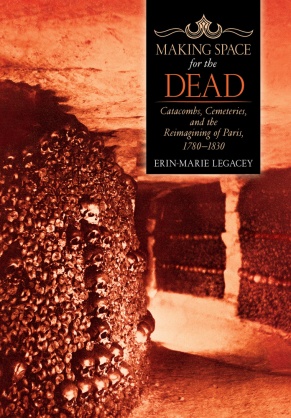 In her new book, Making Space for the Dead, Erin-Marie Legacey discusses the forces of why this change of heart and practice happened within just fifty years: “As this book articulates, the new spaces that appeared in Paris in the first decade of the nineteenth century gave shape to a new burial culture that was both a product of, and a reaction against, the experience of revolution.”

After the Terror, French national identity was shaken to its core. To promote patriotism (as well as solve several public health concerns), politicians began to push new Republican ideals of equality and virtuosity into burial practices. By doing this, they hoped to create “. . . a powerful but untapped fount for public instruction and social cohesion: the dead could provide models of civic virtue and act as a bridge uniting past and present.”

Shedding light on evolution of Parisian burial culture, Legacey shows us through engaging anecdotes and macabre illustrations from the period her aim to “ . . . tell the story of how and why Paris’s new culture of the dead developed as it did between 1780 and 1830.”

Overall, Legacey’s book shows that building proper burial sites for the dead after the Reign of Terror wasn’t a sign of defeat for France, but a sign of hope. Cemeteries were the proverbial light at the end of the tunnel that signaled not only a future for France as a country, but also for the continued unity of its people. “Ultimately, restoring order to the dead in the city gave Parisians the opportunity to begin the difficult work of rebuilding their social world after the Revolution.”

Granted, unlike with my end of my tour of the Catacombs, their light at the end of the tunnel probably wasn’t the gift shop.

To find out more information about the author or to purchase Making Space for the Dead, please click here.

Christine Gaba is a senior writing major at Ithaca College with a minor in English. When she is not reading or writing you can find her playing her clarinet, in the kitchen baking, or at a coffee shop with friends.