As part of our celebrations of our 150th anniversary, we’ve compiled a series of short biographies of our esteemed directors. Here is the first entry, about the first director, in this series. 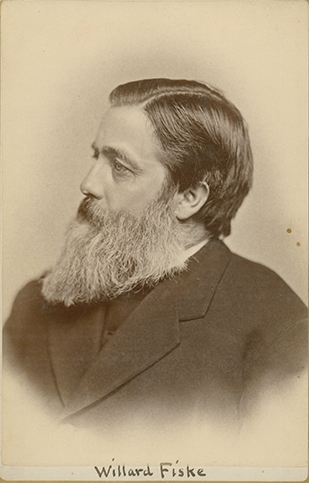 When Cornell University Press was established in 1869, the board of trustees appointed Daniel Willard Fiske (usually known as Willard Fiske) as its first director. Fiske’s background was well suited to running the press, he was already the university librarian and held a chair in North European languages at Cornell. Earlier in his career he was an assistant librarian at the Astor Library in New York City, founder of the Chess Monthly journal, editor of the Syracuse Journal, partner in a bookstore, and a former editor of the Hartford Courant in Connecticut.

University founder A. D. White and Fiske were boyhood friends and Fiske was an important adviser to White in the early stages of planning the university, which included plans for a university press from the beginning. Once the press was up and running, with student labor recruited and Benjamin Hermon Smith appointed as manager, White was not as closely involved. He was officially replaced as director by Smith in 1871 but kept a close watch over its affairs until his retirement in 1883.