Marvel’s critically-acclaimed new film Black Panther broke multiple box office records this past weekend by delivering the fifth-largest opening of all time. While the film is clearly a superhero movie, it does draw deep inspiration from actual political events of the past century. Director Ryan Coogler, born in Oakland, California, set several key scenes in the city to honor his hometown as well as to bring awareness to Oakland’s pivotal role in setting the stage in 1966 for the founding of the Black Panther Party movement. 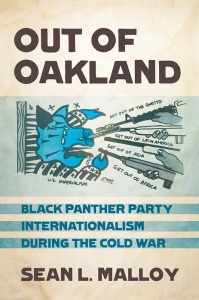 “On October 15, 1966, two young men in Oakland, California, drafted the charter for a new organization they dubbed the Black Panther Party for Self-Defense. Demanding ‘Land, Bread, Housing, Education, Clothing, Justice and Peace,’ their ten-point program was a ringing call for Black Power and self-determination. Minister of Defense Huey P. Newton and Chairman Bobby Seale were not the first to use the panther icon. Earlier that year, Stokely Carmichael (later known as Kwame Ture) and the Student Nonviolent Coordinating Committee (SNCC) had joined local activists in Alabama in founding the Lowndes County Freedom Organization, which adopted a black panther as its symbol. The LCFO was sometimes referred to as the Black Panther Party, and its logo was soon adopted by a number of black organizations in the urban North and West. Newton and Seale’s Black Panther Party for Self-Defense was one of two similarly named groups in Northern California. A rival Black Panther organization was located across the bay in San Francisco. The Oakland-based Panthers, however, soon distinguished themselves from their contemporaries to become arguably the most visible representatives of the black freedom struggle during the late 1960s and early 1970s.

Dropping ‘Self-Defense’ from its name in early 1968 at Newton’s behest, the Black Panther Party (BPP) quickly expanded from a small, West Oakland neighborhood group to a national organization with chapters in sixty-eight cities across the United States. In 1970 the party established an international section in Algeria, under Minister of Information Eldridge Cleaver, that would serve as an officially recognized embassy for the BPP and a beacon for U.S. revolutionaries abroad, attracting figures ranging from Black Power skyjackers to fugitive LSD guru Timothy Leary. Engaging directly with the expanding Cold War in the Third World, BPP representatives cultivated alliances with the governments of Cuba, North Korea, China, North Vietnam, and the People’s Republic of the Congo. Newton personally offered ‘an undetermined number of troops’ from the ranks of the BPP to aid the struggle of the National Liberation Front (NLF) against the United States in South Vietnam. The Panthers also pursued links with the Fatah party led by Yasser Arafat and attended meetings of the Palestine Liberation Organization (PLO) in Jordan and Kuwait. In addition to these direct connections, the party boasted support groups and emulators as far afield as India, New Zealand, Israel, Japan, Great Britain, West Germany, and Scandinavia.

The government of the United States responded to the rise of the BPP by launching an unprecedented campaign to infiltrate, undermine, and destroy it. FBI director J. Edgar Hoover declared in 1969, ‘The Black Panther Party, without question, represents the greatest threat to the internal security of the country.’ The party became the number one target of the bureau’s covert Counterintelligence Program (COINTELPRO) and the subject of 233 of its 295 known operations. The CIA also kept tabs on the party though its MH/CHAOS program.  A congressional committee echoed Hoover in declaring that ‘through its deliberately inflammatory rhetoric and through the actual arming and military training of its members, [the BPP] contributed to an increase in acts of violence and constitutes a threat to the internal security of the United States.’ The State Department, meanwhile, pressured the Panthers’ foreign allies, most notably Algeria. In October 1971, Secretary of State Henry Kissinger invoked the specter of the Panthers in his meeting with Premier Zhou Enlai in preparation for Richard Nixon’s visit to China, speaking of ‘the average American, not Huey Newton.’

‘[W]e saying that theory’s cool,’ proclaimed Illinois BPP chairman Fred Hampton in 1969, ‘but theory with no practice ain’t shit.’ A core theme of Out of Oakland is the link between the Panthers’ domestic analysis and operations and their international engagement with revolutionary governments and movements. From the beginning, Panther leaders drew on a long tradition of anticolonial theory and practice in order to make sense of the situation facing black Americans. Though initially focused on the daily problems afflicting the residents of cities such as Oakland, the leaders’ anticolonial analysis prepared them to quickly cultivate international alliances as they turned outward in response to U.S. government repression. These foreign contacts, in turn, not only provided practical support for the BPP and its efforts in the United States but also helped party leaders further refine their anticolonial critique of American society.”