Here are some of our most popular social media posts in the month of May. It’s safe to say the Dead ruled Sage House as we celebrated the publication of Cornell ’77: The Music, the Myth, and the Magnificence of the Grateful Dead’s Concert at Barton Hall, with events timed to the 40th anniversary of the Dead’s legendary concert at Cornell.

On Twitter, bells were ringing about the concerts on campus and elsewhere:

Relive the Grateful Dead's 5/8/77 concert with music and events for the 40th anniversary May 8th. @cornellchimes https://t.co/ut3EOou8zY pic.twitter.com/hsCMF8k7TU

We have the Cornell Store to thank for this regrammed image:

@thecornellstore is hosting a #booksigning on May 8th with #Cornell77 author @phconners 4:30-6:00! So much is happening on the 40th anniversary of the #GratefulDead concert at #BartonHall. After you're set up with your autographed copy, catch the #CornellChimes concert across Ho Plaza at 6 when they'll be playing some Dead tunes from the clock tower. Then on to @rhino_records & @stateofithaca sponsored musical celebration at 7:00 in downtown #ithaca! . . #regram #whew

A post shared by Cornell University Press (@cornelluniversitypress) on May 4, 2017 at 8:24am PDT

And finally, in Sage House News, it was all about the t-shirt: 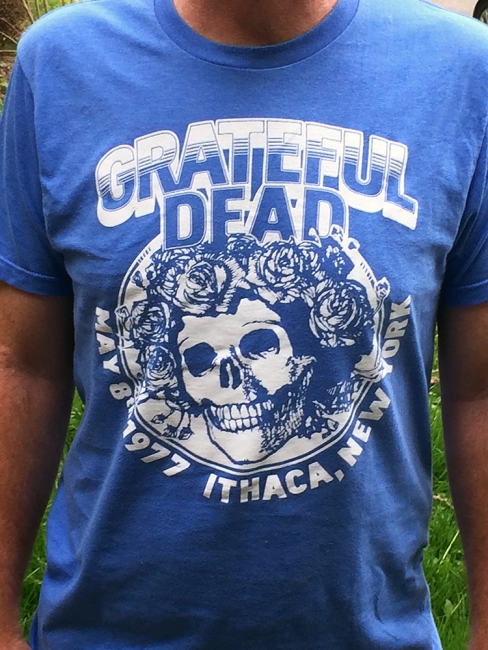