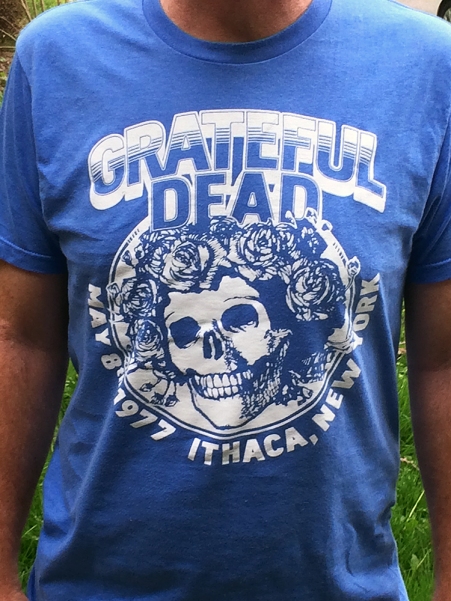 The difference a t-shirt makes: That is a lesson about regional publishing that I learned in the course of editing our new book, from Peter Conners, about the Grateful Dead’s 1977 concert at Barton Hall on the Cornell campus. When the authors, artists, editors, and archivists who play key roles in developing a book live in close proximity, chance meetings that can change a book are more likely to occur. And, as I learned last summer, if you are at the right place at the right time, you would do well to be wearing the right item of clothing.

But let me provide some background.

In June 2016 I was consulting with Peter on the book that would be titled Cornell ’77: The Music, the Myth, and the Magnificence of the Grateful Dead’s Concert at Barton Hall. After another round of editing from me and Dean Smith, Director of Cornell University Press (and a Deadhead), Peter was back at the work of revision. In that editorial lull, I was tasked with hunting down visual art. The contract called for twenty or more images, and both Peter and I wanted the book to have lots of photos and ephemera to help readers appreciate the spirit of spring 1977. Unfortunately, photos of the band related to their May 8 show at Cornell proved hard to find.

At the Cornell Archives in Kroch Library, Laura Linke, Evan Fay Earle, Liz Muller, and Heather Furnas had been immensely helpful in locating files associated with the Cornell Concert Committee, which had brought the Dead to campus. I uncovered documents related to the planning of the show, security provisions, and the signed contract that formalized everything from payment to how many bottles of red Bordeaux would be available to the band backstage. But archival photos of the Dead on stage at Barton Hall were limited to three blurry black and white shots from a Cornell student, Lawrence Reichman, who had clearly been jostling for position amidst the energetic crowd.

I was wearing that t-shirt while cooking dinner at home, when a neighbor came by to visit. She seemed to recall a photographer in town who had Grateful Dead photos framed in his studio. His name was Jon Reis. Did I know him?

I knew others had taken photos. One image of the Dead had appeared in the Ithaca Journal on the Monday after the show. But, like many papers, the Journal had long since gotten rid of its morgue and had no files dating back to the 1970s. Then there was a shot on the cover of the Good Times Gazette, a very-Ithaca periodical from the era. But the Gazette went defunct years ago, and the credited photographer, Cliff Diver, was clearly using a pseudonym and was thus next to impossible to trace. Even when, earlier in 2016, Melanie Lefkowitz ran a short piece on the research for the book in Ezra, Cornell’s magazine, all I received from alumni were reminiscences.

Around this time, Peter sent t-shirts to Sage House for Dean and me. They were light blue and, below a recognizable skeleton head, featured the text “May 8, 1977” followed by “Ithaca, New York.” The shirts were a good will offering from Peter at a time when we were all feeling the pressure of meeting a July 15 deadline for the finished manuscript. I appreciated his gesture and liked the shirt. I wore it pretty regularly, especially as the weather became warmer and spring turned into summer.

So I was wearing that t-shirt on June 22 while I was cooking dinner at home, when the doorbell rang. A neighbor had come by to visit. Noting the t-shirt, she offered some of her memories of rock shows in the late 1970s and, in return, I shared my anxieties about the paucity of photos from the May 8 show. She seemed to recall a photographer in town who had Grateful Dead photos framed in his studio. Maybe they were from 1977? Did she remember the photographer’s name, I asked. My neighbor was not at all sure about the date, but she was certain who the photographer was. His name was Jon Reis. Did I know him?

I did not, but my wife did and, anyhow, Jon was easy to look up. The next day I emailed him, introducing myself and asking if he had “photographic images of the show, the crowds, and the general scene at Cornell on and around May 8, 1977.” Jon wrote back directly and said he had material, but that he would not be able to meet until July. So, while waiting to see Jon’s work, I looked into other leads. All came to naught, even with the earnest help of Nicholas Meriwether, founder of the Grateful Dead Archive at University of California, Santa Cruz; the photographic record of the Dead’s spring 1977 East Coast tour was thin to nonexistent. Jon Reis was my last and only chance to make the art selection for Peter’s book all we had hoped it would be.

There was Jerry Garcia playing his TB500 guitar and seemingly in a trance with his eyes obscured by his trademark sunglasses. Then there was Bob Weir at the mic, looking clear-eyed out into the crowd.

When I met Jon in his second-floor studio office on Ithaca’s West State Street on July 27, I was eager and anxious. A lot was riding on a single contact sheet of the photos he took on freelance assignment for the Ithaca Journal in 1977. Once I started looking over his work from the show, all my anxiety dissipated. The photos of the band were fantastic: sharp, well composed, and remarkably candid. There was Jerry Garcia playing his TB500 guitar and seemingly in a trance with his eyes obscured by his trademark sunglasses. Then there was Bob Weir at the mic, looking clear-eyed out into the crowd. Ensemble photos showed the band sharing glances and responding to cues amidst jams. There were also photos, from another roll of film, of the Dead’s limos outside Barton Hall and Danny Rifkin, manager of the band at the time, closing the car door as he made his way into the hall for set-up.

Those two contact sheets were a treasure trove, chock-full of artistic talent and serendipity. Indeed, the shots Jon took of the Dead arriving on the scene before the show were completely accidental and not part of his assignment. He just happened to be on campus and had been curious about the three black stretch limos rolling up in front of Barton. At the time he took the photos, and up until an August 28 email in which Nick Meriwether confirmed that a key image was indeed of Rifkin, Jon was not even sure they were the Dead’s limos.

“It is such a boon having Jon Reis’s photos of that magical night at Barton Hall included in the book,” Peter wrote to me in a recent email. “They take us one step deeper inside the action and visually document one of the most storied shows in Grateful Dead history.” Jon’s photos—13 black and white shots out of 41 images all told—paired with Peter’s writing, really make Cornell ’77 great.

In addition to the photos related to the Dead, Jon provided images from Cornell and Ithaca in the mid-1970s that offer a rich sense of place and context for the book. We even have an image of the snowfall that began during the evening of May 8 and left Ithaca blanketed in white on May 9. For anyone who was at the show, the experience of snow in May was part of the magic of the event; thanks to Jon, Cornell ’77 has visual evidence of the meteorological and musical magic of that night. `

Jon commented to me in an email after he had seen a copy of the completed book, “Who knew when I was just 28 years old and making $2.10 per hour as a freelance photog that the one roll would lead to this book!” (And, to go under the heading of “who knew,” there is another blog post to write about how the development of the book intersected with Rhino Entertainment’s production of the new box set of recordings from May 1977 that highlight the Cornell show.) Reflecting on my own experience of serendipity or perhaps just dumb luck, I think about the t-shirt that sparked the conversation with my neighbor that lead me to Jon and his brilliant photos. That t-shirt was Peter’s gift to me as his editor. The t-shirt turned out to be a gift to all the readers of Cornell ’77 who now can enjoy these wonderful and never-before-seen photographs. 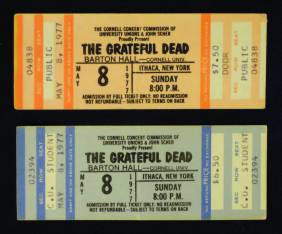 Michael J. McGandy is Senior Editor and Editorial Director of the Three Hills imprint at Cornell University Press. Follow him on Twitter @michaelmcgandy.

Cornell ’77: The Music, the Myth, and the Magnificence of the Grateful Dead’s Concert at Barton Hall
by Peter Conners
$21.95 hardcover