Book editors are notorious for having too much to read and edit, running behind schedule, and, generally, holding up brilliant work that should have been published yesterday. Whether we are seen as imperious gatekeepers whose ways remain hidden behind in-house processes or as antiquated bureaucrats dithering at our desks, there is a general sense that authors as well as readers are unfairly beholden to our jam-packed schedules.

There is some truth to those assessments, of course. And of late I have been keenly aware of these critical (and sometimes contemptuous) evaluations of the work of editors. Coming back to my desk after six weeks of personal leave, and facing hundreds of emails and tens of overdue commitments, has reminded me of how many people are waiting, some patiently and some less so, on word from me about their book projects.

There is a sense of timeliness that is about the inherent quality of the work—the time a work needs and not what the events of our times might mean for its reception and relevance.

I have also been reflecting on the whole idea of the timeliness of books and the time that it takes to make books, particularly excellent books. Recent political events have turned over lots of publishing ideas with once-important books fated for irrelevancy on their first day of sale on Amazon, and editors and authors chasing after the new hot topic associated with the Trump presidency. Timeliness is, indeed, fickle. But there is also a sense of timeliness that is more about the inherent quality of the work—the time a work needs and not what the events of our times might mean for the reception and relevance of a work. That aspect of timeliness is also uncertain, but I would not call it fickle. One project, in particular, comes to mind when I consider the time authors and editors take to make a book.

When Marisa Scheinfeld sent me a note out of the blue in the fall of 2012, she was pitching a project called “Leftover Borscht.” It was, at its core, a photo book featuring color shots of the ruins of places like Grossingers and the Concord Hotel in the Catskills. The work was also a history book, an excursion into memoir, an effort in sociology, and an entertaining skim for people who love big, beautiful coffee-table offerings from Rizzoli or Abrams. The selection of photos was stunning, but there were only 80 all told. The proposal was wrapped up in a lot of language that seemed appropriate when sending a project to a university press but which might be off-putting to other readers. I read the proposal, looked at the images, reread the proposal, and scratched my head. As I recall it, and as my email record from that year suggests, I then wrote to Marisa and asked to talk on the phone.

I know that the book we published is as close to perfection as any book with which I have been associated.

That was four years ago and between then and this past September much work and thought has gone into the book that would come to be called The Borscht Belt: Revisiting the Remains of America’s Jewish Vacationland. And the time was well spent—Marisa and I found the right balance of art and words, the right words from the right essayists, and the right mix of contemporary photos of the dilapidated resorts and ephemera from the golden age of vacationing in the Catskills. As important, at least to this editor, is that Marisa and I forged a great working relationship and developed a substantial amount of trust in one another. That trust was critical to a project that is deeply personal—a photographic exploration of the landscape of Marisa’s childhood and the childhood and adolescence of hundreds of thousands of people who vacationed, celebrated, and worked at the resorts of the Borscht Belt. 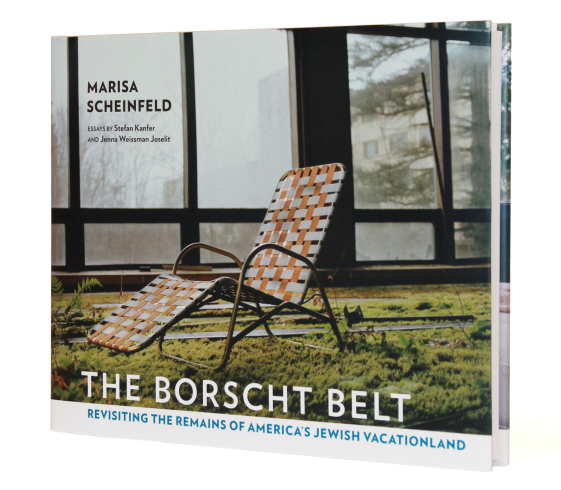 The book had to be done right, but right is seldom done quickly. Marisa’s book was slow in development. Did The Borscht Belt require four years to come to fruition? I cannot argue for the necessity of every month Marisa and I, and then our manuscript editor Sara Ferguson and our designer Scott Levine, happily labored on the images, words, and layout. But I do know that the book we published is as close to perfection as any book with which I have been associated.

What I think most authors and readers do not know—and some of my own ilk forget particularly when faced with a daily tide of emails and surrounded by stacks of unread manuscripts—is that book editors want to slow down. We want to be deeply engaged with our authors and our books. We want to make the books better and we also want to be affected by the books we work on. Marisa gave me that opportunity, and I am grateful to her for that time. It seems to me, looking back just a few weeks since its publication, that we had precisely the amount of time that The Borscht Belt needed.

Michael McGandy is a Senior Editor at Cornell University Press, acquiring in the fields of U.S. History, Presidential Studies, New York State, Urban History, and U.S. Urban Development & Policy. “Outbox” will be a regular feature of this site. Follow him on Twitter @michaelmcgandy.

Learn more about Marisa Scheinfeld’s book on her website.

Read our Q & A with the author.