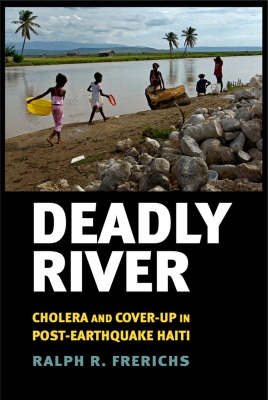 Nearly six years after Haiti’s catastrophic cholera epidemic, the United Nations has acknowledged its role in the initial outbreak. Not as widely known is the disturbing story of political intrigue as the crisis unfolded, and how the world’s wealthy nations, nongovernmental agencies, and international institutions responded when their interests clashed with the needs of the world’s most vulnerable people.

Ralph R. Frerich’s Deadly River: Cholera and Cover-Up in Post-Earthquake Haiti, published this spring from Cornell University Press, tells this story through the eyes of disease detective Renaud Piarroux, who was sent by the Haitian government and French embassy to investigate the mystery surrounding the epidemic’s origins. A short excerpt follows.

It was Monday morning, November 22, 2010. A CDC [US Centers for Disease Control and Prevention] team was presenting the results of an epidemiological case-control study. The researchers had set out to identify risk factors for contracting cholera in the town of Petite-Rivière-de-l’Artibonite, in the heart of the Artibonite valley. Did cholera come from food—perhaps brought from a coastal city? Did it come from kitchen practices or river water?

The findings were limited to people in that one community, although others in the valley region might well have responded in a similar manner. The investigators interviewed forty-nine people with cholera, asking about their diet and hygienic precautions taken in the three days before onset of their illness. They asked the same questions of ninety-eight healthy people from neighboring households—the “controls.” By linking the responses of the cases and controls statistically, the CDC team could estimate the relative risk of cholera associated with the factors of interest.

For a moment, Piarroux’s  mind channeled Sherlock Holmes and his classic deduction about the dog that did not bark in the night.

The presentation offered two main—and rather puzzling—conclusions: drinking untreated water from the Artibonite River was not a risk factor; consuming meat and raw vegetables protected people from cholera. These unexpected results created quite a buzz in the room. Piarroux sat quietly listening to the presentation, reflecting on what he had learned about the likely dynamics of Haiti’s cholera epidemic from his field investigation. For a moment, his mind channeled Sherlock Holmes and his classic deduction about the dog that did not bark in the night. Holmes and a detective colleague at Scotland Yard were addressing a mystery that involved the disappearance of a famous horse the night before an important race and the apparent murder of its trainer.

Regarding that night, the Scotland Yard detective asked Holmes, “Is there any other point to which you would wish to draw my attention?”

Holmes replied, “To the curious incident of the dog in the night-time.”

The Scotland Yard detective thought for a moment. “The dog did nothing in the night-time.”

“That,” replied Holmes, “was the curious incident.”

Holmes reasoned that the dog made no noise because no stranger had appeared. Instead, the late-night visitor was someone the dog knew well, and hence no barking was required.

He immediately recognized a timing problem with the CDC study. Since the new cholera cases were asked about their exposure to river water up to three days before they became ill, the first possible exposure time was October 31 minus three days—October 28.

“That you found no cholera risk from the Artibonite is, in fact, the curious cholera risk of the flowing river,” thought Piarroux. He immediately recognized a timing problem with the CDC study. Since the new cholera cases were asked about their exposure to river water up to three days before they became ill, the first possible exposure time was October 31 minus three days—October 28. If his own preliminary investigation was correct, a large mass of cholera had likely entered the Artibonite River on October 17, then flowed past where the CDC study took place around October 18–19. In other words, by the time the CDC study began on October 31, the river was no longer the main transmission agent of cholera. Instead, new waves of cholera cases were probably infected mainly by previous human cases, household food or water, or contaminated well or storage water—like what happened in Saint-Marc. This explained—using the language of Sherlock Holmes—“the curious cholera risk of the flowing river.”

There was another timing problem. When the cholera epidemic was first discovered, MSPP [Ministry of Public Health and Population] had rapidly implemented a prevention campaign. It began on October 22, 2010. Surely, thought Piarroux, local people must have become aware that the water of the Artibonite River conveyed a deadly disease. If so, both the current cases and the controls would have drunk less river water than before, which would have given CDC investigators a false impression of the percentage of Petite Rivière de l’Artibonite residents who consumed river water when the initial outbreak began on October 19–20.

To Piarroux, when the disease was like a raging forest fire sweeping through community after community, their approach was like studying a single, smoldering tree.

Yet CDC’s water findings did add another piece to the puzzle. While Piarroux’s own investigation was not yet complete, he had made some firm observations and had several important hunches about point source versus continuing source exposure. He hypothesized that the Artibonite River transmitted cholera. Since exposure to the river was not a risk factor in the CDC study, he inferred that the risk had been transient with a contaminated plume serving as a passing point source of infection. Once the plume had flowed by and the initial wave of cholera cases had occurred, the risk of future cases was more associated with secondary human transmission or contaminated wells or stored water than with the drinking water from the river.

If CDC had reported that river drinking water was still a risk factor, this would have suggested continued soiling of the river by sewage from many cholera-ridden persons, with the river serving as a continuing source of infection. Each finding—whether point source or continuing source—would take the investigation in a different direction. Most important, the CDC team should have ended up at the Nepalese peacekeepers’ doorstep had they only followed the clues. Piarroux was convinced that there were only two explanations for why they didn’t: either they misunderstood the relevance of their study findings, or they didn’t want to go anywhere near that MINUSTAH [Mission des Nations Unies pour la Stabilization en Haiti] camp. . . .

Piarroux got the distinct sense that CDC had seriously underestimated the knowledge and experience of the Haitians. But he saw another, more overarching problem in the agency’s approach. Clearly, cholera—a disease absent from Haiti for a hundred years or more—had to have started somewhere. There had to be a point of origin in the country and an explanation for what triggered the massive outbreak. One would expect that conscientious epidemiologists would also focus on the many ways the disease was spreading in different regions of the country, noting the role of personal habits and the physical and social environment—information vital for formulating intervention and prevention programs. A single case-control study done in one geographic location is not enough to clarify complex geographic patterns. To Piarroux, when the disease was like a raging forest fire sweeping through community after community, their approach was like studying a single, smoldering tree. . . .

After the meeting, Piarroux and Barrais spoke with Dr. Lafontant, who hinted that some people in the LNSP [Laboratoire National de Sante Publique] had had accurate information on the early days of the epidemic that had never been made public—probably for political reasons, Piarroux assumed. Little by little, he was piecing together the puzzle of what had happened in Mèyé and Mirebalais. Apparently a fact-finding mission had been sent to the area soon after doctors from the Cuban brigade had reported the first cholera cases. Investigators had probably documented what had occurred, but so far there was no trace of a report.

So much remains to be discovered, thought Piarroux. But he would have to be patient. The wall of silence that had been erected was a difficult one for a foreigner to breach.

Deadly River: Cholera and Cover-Up in Post-Earthquake Haiti, is part of The Culture and Politics of Health Care Work, a series edited by Suzanne Gordon and Sioban Nelson and published by ILR Press, an imprint of Cornell University Press.