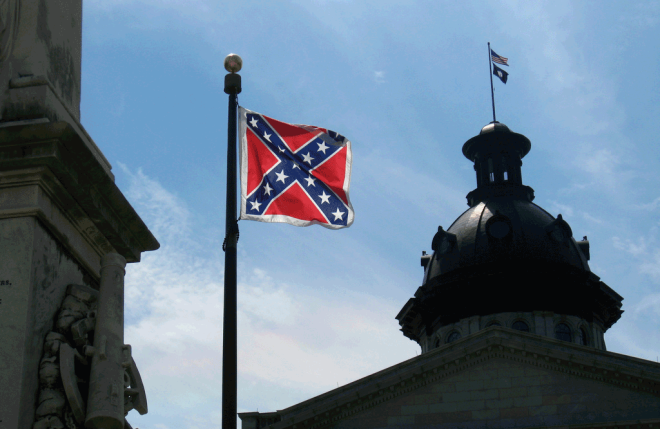 Meili Steele opened his 2005 book, Hiding from History, with an essay about South Carolina’s attempt in 1999 to neutralize the controversy over its flying of the Confederate battle flag. The state’s chosen solution, Steele argues in this brief excerpt, was an act of political expediency that cut short a necessary public debate—one that needed to include a serious examination of American history and culture.

Six years ago I was reading the local newspaper in Columbia, South Carolina, and discovered that the state legislature was proposing to put the public understanding of history to a referendum. The focus of the referendum was whether the flying of the Confederate battle flag over the statehouse was a fitting memorial to past traditions or a symbol of the legacy of racism. The legislature had raised the flag over the statehouse in 1962 at the beginning of the Civil Rights movement; however, now that the flag’s presence had become controversial, many legislators wanted to avoid a public stand. By calling for a referendum on the flag, the legislators hid from what properly should have been a public debate by appealing to democratic procedures.

The ensuing discussion revealed that this interpretive vacuum was not an isolated example of political cowardice but part of the state’s educational philosophy. Public school teachers, like legislators, tried to ignore the interpretive issues surrounding the flag. For many legislators, educators, and the Chamber of Commerce, the controversy was an annoying distraction from the problems of the present. Education meant instruction in the basic skills and facts necessary for the global market along with the inculcation of respect for the law. The certainty of moral education could be divorced from historical ambiguity. Citizens did not need cultural or historical orientation for deliberation about their public lives. According to this way of thinking, there was no reason to get bogged down in the subjective self-understandings of individuals who could decide for themselves which interpretation of history to believe. If history were to go beyond facts, then this matter should be privatized—individuals could seek out their own interpretations, just as they could decide what novels to read or movies to watch.

When public pressure mounted—including an effective boycott by the NAACP—it became obvious that the flag issue was not going away and that business would be hurt by its continued presence. Then many of the legislators who had previously wanted to forget the flag started working to take it down for the same reasons that they had earlier wanted to ignore it—to get it out of the way of business. A compromise was finally worked out. The flag was to be moved from the top of the capitol dome to a place on the statehouse grounds, and an African American memorial monument was to be constructed on another part of the grounds.

The widespread satisfaction at resolving the debate helped everyone ignore the model of public deliberation that was dramatized. According to this model, conflicting historical interpretations should not raise questions about how a democracy should interpret its past; rather, the resolution of public disputes should be the result of a compromise among competing interest groups. Cultural difference and history were merely politically sensitive issues that needed to be handled strategically rather than through discussion about how citizens should reason. By giving each side its own memory site, the state tried to neutralize not only the conflict but history itself. Schoolteachers could thus continue their practice of giving a version of the past that had no conflicted legacies, that offered no interpretive political concerns for the present….

This local conflict over the flag resonates with the recent national debates over history in the United States, Germany, and France. In most parts of the United States, the source of controversy has been not the Civil War but multiculturalism and patriotism (Nash 1997). In Germany, we find the “Historians’ Debate” over how to give a proper account of the Holocaust (Baldwin 1990). In France, we find debates over the commemoration of 1789 and how to understand a multiethnic state (Kaplan 1995). However, the resonance of this local example does not stop here; it extends to the international debates about how to understand the ways that different societies negotiate cultural and political “transitions to modernity”—or, more precisely, to modern democratic culture. All these issues ask us to bring together what Western modernity has tried to keep apart—the explanatory work of social and cultural history and the philosophical work of practical reason.